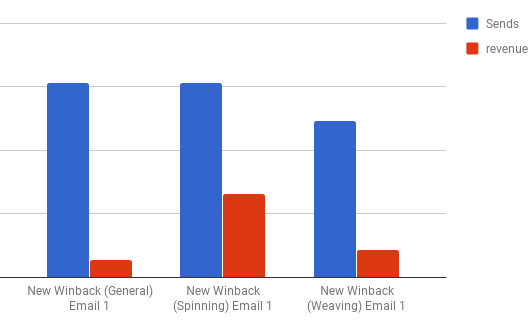 The Goal: To increase revenue and conversion rates from automation emails.

Segment automation emails based on past purchasing behavior. We decided on three segments based on which product groups have the highest volume of sales: Spinning, Weaving, and a General catchall for customers who don’t fall in either of the previous segments. Each sequence included two emails, with the second sending two weeks after the first, but only if the person didn’t make a purchase after the receiving the first email. Each segment is mutually exclusive, so if a customer was already in one segment, they wouldn’t receive emails for another. The copy was slightly different in each message with content specific to the segment.

Segmented emails for Weaving and Spinning performed much better than the General segment, proving our theory that tailoring your message to customer preferences results in better conversion rates. Approximately the same number of emails were sent for both General and Spinning. The Spinning email generated more revenue. The Weaving email had fewer sends than the General email, it still generated more revenue.

These three new winback flows generated 200% more revenue in two weeks than the original generic winback flow that the company was using the previous month.