Craftivism, Disaster Relief, and Yarnbombing: The Privilege of Protesting with Yarn 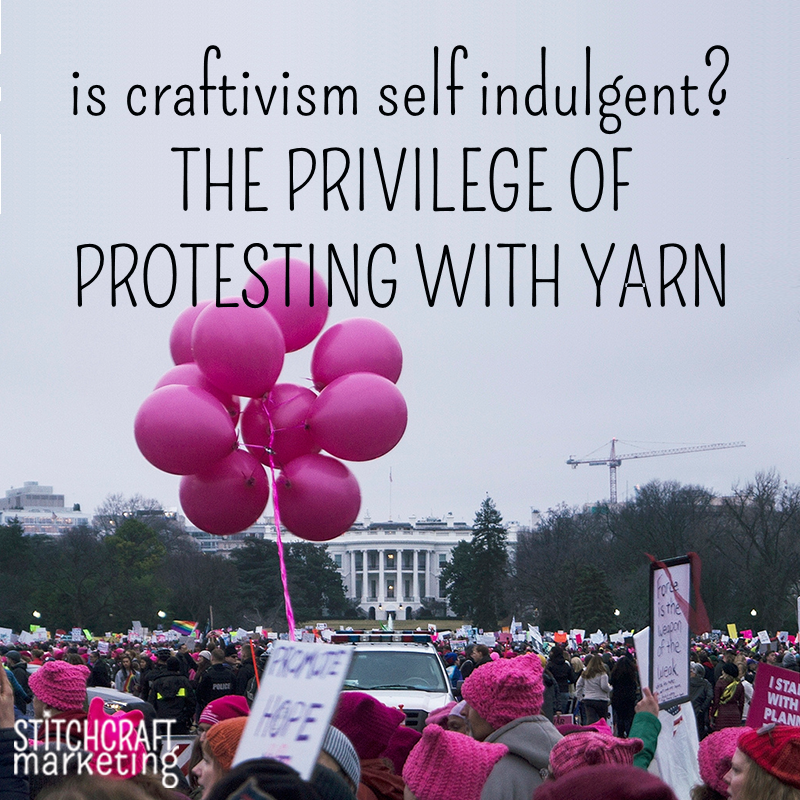 11 Oct Craftivism, Disaster Relief, and Yarnbombing: The Privilege of Protesting with Yarn

Did you knit a pussy hat? I did. I didn’t knit the original sewn rectangle because I am an Advanced Knitter. Instead, I dove into my stash looking for pink and came up with a skein of Misti Alpaca Baby Me Boo in Blush Red. After searching hat patterns on Ravelry by yarn weight, I chose a pattern I had been wanting to knit for a long time (Adela Illichmanova’s Capucine--love those tassels!), and cast on. I added little triangular ears on the crown and wore it proudly to my state march in Montpelier, Vermont on January 21, 2017.

Well, “proudly” might be overstating it a little. I’m an adult woman and wearing a hat with ears felt a little foolish, although I was far from alone in the crowd. Maybe if I had been part of the DC march, I would have felt even more solidarity and more pink pussy hat pride.

Or maybe not. Even as I embraced the symbolic unity of the pussy hat, I wondered just how effective a statement it was. I’m all for using needles and yarn to express myself, and in Vermont in January, it was good to have a warm hat, but I didn’t continue to wear it through the winter, and I’m going to unravel the ears before I don it again. Knitting and wearing a pussy hat wasn’t my first act of craftivism, but it was definitely the one in which the most crafters took part along with me. From that extraordinary groundswell of political energy converted into craft, the intervening months have shifted my view of how craft and public life intersect.

I’m offering these thoughts in the aftermath of Charlottesville, of Hurricanes Harvey, Irma and Maria, of the impending repeal of DACA. For many of us, picking up our needles is our first response to anything that disturbs us. We look to our knitting foremother, Elizabeth Zimmermann, and heed her advice: “Knit on, with confidence and hope, through all crises.” We channel our nervous energy into our craft and feel we can make a difference with the action of our needles.

But can we? Is craftivism an appropriate response to the injustice we see in the world, or is it a self-indulgent way to go through the motions of feeling like we’ve taken a stand? The pushback on Tina Fey’s “Sheetcake” Weekend Update skit suggests that the line between symbolic protest and the self-care we engage in to remain strong for the resistance might be a little too close.

Julia Feliz’ piece on Medium, “An Open Letter to the Craftivist Movement” addresses the privilege of choosing to protest via craft, and how hollow pussy hats feel now, nine months into the Trump administration. Knitting may make me feel better, but how does it combat systemic oppression?

I would argue that we are past the point of symbolic gestures. In the aftermath of Charlottesville, a Facebook group sprang up, Hearts for Cville. Its stated mission was to “hang knitted/crocheted hearts all around Charlottesville.” One of my dearest knitting friends jumped on board, posting pictures of all the hearts she knitted all over her social media and, I guess, mailing them to Charlottesville, where they would be hung up around the city. The same friend had, earlier this year, enlisted me to help knit a Welcome Blanket as part of the Welcome Blanket Project out of the Smart Museum of Art at the University of Chicago, a project by Pussyhat Project co-founder Jayna Zweiman. She mailed me the yarn and I sent my square back to her. She assembled them and sent the completed blanket, with squares from a whole squad of knitters, off to the museum.

Why did I join her for one and not the other? It seems obvious to me. The Welcome Blanket Project, while aiming to create a symbolic border wall of knitted and crocheted blankets equal to Trump’s desired physical wall, will distribute the blankets after the show closes to resettlement organizations so that they can be given to actual refugees to welcome them to their new homes in the United States. The result of my crafting efforts is an object that will be given to someone for actual use. That it will be both an artistic political statement and a real gesture of welcome in the face of the administration’s xenophobic policies makes it, to me, a craftivism effort I was happy to support, especially as it drew me together with my fiber friends from my former home.

The hanging hearts, though, made me shake my head. It’s a great way to use up those bits of leftover yarn. It’s a simple pattern, great for social knitting when you want to get together with friends and craft with adult beverages. Maybe, the sight of a yarn heart hanging on a fence or from a lamppost will give a little lift to someone who is despondent about the display of white supremacy in Charlottesville and the president’s “both sides” response to it. And then one of the hurricanes storming up the East coast (not, of course, due to climate change) will soak the hearts hanging around Charlottesville and these gestures of crafty goodwill will become sad, sodden tangles of yarn in need of removal, certainly before the holiday season.

The thought of hurricane relief brings me to another point I want to make here (as I write, Irma has devastated Barbuda and St. Maarten and Floridians are evacuating. Jose is gathering strength). I am happy I haven’t seen any calls to knit or crochet and send objects to victims of the hurricanes. First, there is the inefficiency of shipping objects into a disaster zone, or, just shipping objects in general (and yes, I realize participating in the Welcome Blanket Project is an example of this inefficiency). Second, the areas affected by these storms are generally warm locations. As a Facebook post I saw earlier this week noted, Houstonians don’t need our cast-off winter coats or our spare blankets. They may need things like bottled water, diapers and laundry detergent, but shipping them mine or yours creates more problems. Send money. Your cash will make things much better than your yarn will.

Maybe I’ve become too cynical to believe in the all-healing power of yarn. Symbolic crafting like Hearts for Cville strikes me as an even emptier gesture than a pussy hat, which at least can keep your head warm. To me, the call to craft a little symbolic decorative object forgets the big picture, and trivializes the change I want to make in the world. Activism shouldn’t be a way to Marie Kondo my yarn scraps. My money is better given to support a cause, rather than to pay to mail my doodad somewhere. My time is better spent contacting my elected representatives to let them know how I want them to represent me.

As a crafter, though, and an activist, you may want to be able to do something that upholds your values with your craft. Designing a pattern or a colorway that symbolizes your stance, or  donating a percentage of the profits of the sale of your products, whether it’s a knitting pattern or your hand-dyed yarn, or something you make and sell locally, is the more effective way to take that stand. Supporting the causes your favorite designers and dyers support by buying their products helps, too. It’s arguably just as self-indulgent as a sheetcake, however, and you may want to think about that. Are you using the cause to justify the purchase you wanted to make all along? I’ll never know your intent, but if you can afford the yarn and/or the pattern anyway, why not give an equal amount to the people or organizations who are on the front line fighting? Imagine the change we could see if every time a knitter purchased that irresistible skein, she also donated to the cause of her choice? Now that’s the way to use yarn for good.

–Laura Abrahamsen.  The views expressed are her own.