The Evolution Of Ravelry Part 1 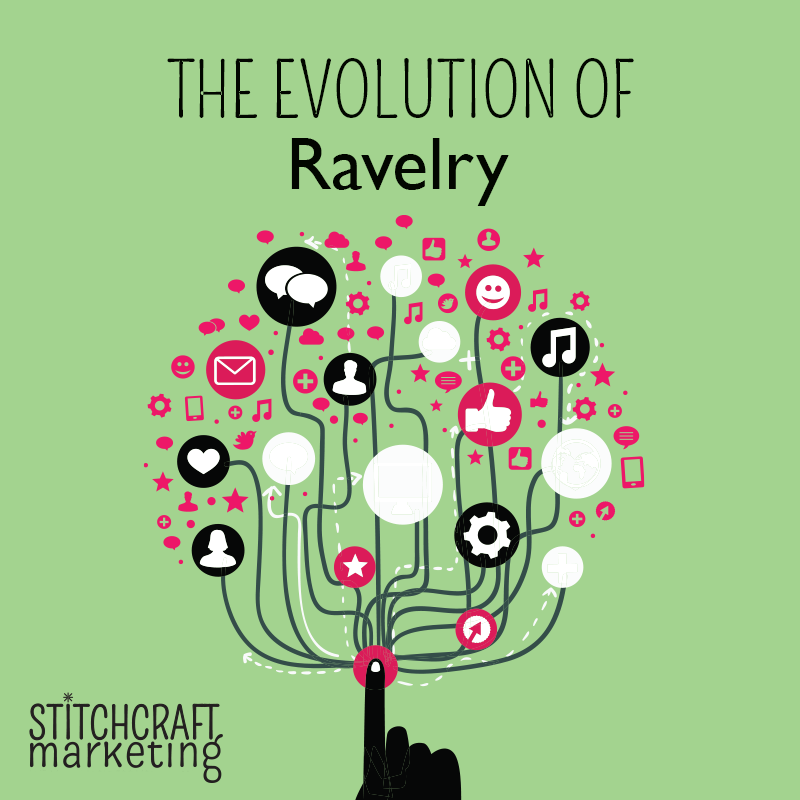 01 Feb The Evolution Of Ravelry Part 1

This is the story of one user’s experience with Ravelry. We’ll call her “YarnWrangler.” Recently, YarnWrangler logged into Ravelry to create a project page for a KAL she had joined. She was surprised to realize that she hadn’t created a new project for a full year–never mind that the last project created was still on the needles–even though she had finished multiple objects over the course of that past year. She had learned about the KAL on Ravelry, researched yarns for the project and commented in the designer’s group about the pattern, but she only created a project so she could upload photos to post in the KAL thread.

What other projects had YarnWrangler done to fill her yarn-crafting year? In 2016, she had knit a Stopover with Mason-Dixon Knitting and finished socks with them; joined FibreShare, an international fiber swap, attempted to win giveaways by different indie dyers and chronicled her first trip to Rhinebeck. None of these fiber adventures began on Ravelry. Most of them caught her attention on Instagram. She also joined Elizabeth Zimmermann and Yarn Harlot groups on Facebook, and shared pictures of projects there and on Instagram with her far-flung yarn friends.

2016 was a big shift in the social media YarnWrangler uses for her crafting life, and the realization that she had stopped adding to the Ravelry database by ceasing to upload her projects, stash and library made her feel a bit guilty. She used Ravelry every day at work to look at trends in designs and yarns, and she used it at home to figure out what she wanted to knit next and it never failed to deliver. But without consistent input from her, the site’s algorithms had limited data with which to recommend new patterns to her, and the site’s community had no access to her experience and insights into the patterns she had made and the yarns with which she had made them.

It also made her a bit nostalgic, as YarnWrangler remembered years ago finally getting that invitation in her email inbox letting her know that she could join the new site especially for knitters and crocheters. Ravelry had been her primary social media site (she was a Facebook holdout for a very long time) and she had wasted plenty of time discussing books, movies, TV shows, food, and careers on boards with strangers with whom her primary connection was fiber, and the secondary connection the particular interest addressed by that board. It was fun to make virtual friends, help them out by sending that last 30 yards of yarn they needed to bind off their projects; try new yarns by buying from other members’ stash; learn about their experiences with different brands of fiber tools, asking and answering questions.

There was also a great feeling of accomplishment once she had entered most of her library, her stash and her projects (she never went as far as needles and hooks). Then it became more difficult to keep up with her own notebook: entering stash was the first task she abandoned, then the projects, and finally the library. She attributed it to her own laziness because keeping up with her yarn and fiber buying habits made stash entry a part-time job. She also attributed it to her impatience, because when she wanted to start a project, she wanted to cast on RIGHT NOW. It was a site designed to help enhance her enjoyment of her favorite hobby. That’s probably why she kept entering library items for so long, because the feature that allowed her to search within her own patterns for the object to make with the yarn she wanted to use was so helpful. But even the library updates began to be infrequent: there were always new possible projects popping up on the Hot Right Now list or in her personalized Pattern Highlights. New and shiny is always better than what’s already on your shelf, and the Advanced Search available in patterns made it so easy to find something she wanted to make.

YarnWrangler also upgraded her smartphone and stopped carrying her tablet with her everywhere. It was so much more convenient for everything, except for Ravelry, which didn’t have a mobile-responsive site yet. YarnWrangler even supported a Kickstarter campaign for the Wooly app, but it just didn’t do everything the desktop site could do.

That’s YarnWrangler’s experience in her relationship with Ravelry. But it’s a common-enough story that we want to look at Ravelry’s influence on the yarn craft industry and figure out how you can harness the power of its best features for your yarn-based business.

In 2007, an avid knitter and blogger turned to her coder husband and said something along the lines of “Wouldn’t it be great if there was a site where knitters could catalogue all their projects and yarn and see each other’s projects and talk about yarn and knitting and all the other stuff, all in one place?” And thus Ravelry was born. It’s an oversimplification, but you can read Jess’ and Casey’s version of the site’s founding here.

There are two major aspects to Ravelry: the personal and the communal. Theoretically, a knitter or crocheter could use Ravelry’s notebook features solely for the purpose of organizing and chronicling their own fiber projects, materials and tools. The communal aspect is that by using those notebook features, an individual’s information becomes part of the larger user-generated, searchable database of information of interest to the fiber-arts community. In that way Ravelry allows any user to search Patterns or Yarns or People or Forums or Groups to find whatever information they’re after, and the information will come from perhaps, the designer of the pattern as well as other people who have made it. That information, for example, about a specific knitting or crocheting pattern, will include:

If the pattern designer has made a digital version of the pattern available, a crafter can buy and download it right from the Ravelry pattern page. That is a whole lot of functionality available for free in one place at one time.

As you can guess, Ravelry took the fiber arts world by storm. Membership was originally by invitation only and early users had to wait weeks to be invited to join. Ravelry’s functionality grew along with its membership because its databases of yarn and patterns were user-generated. It relies on its members to take the time to add a brand-new yarn or pattern to the database. Because it is free to users, there is an attitude of ownership that generally makes members want to contribute to the overall usability of the site for all members, but in practice, only a small fraction of the members add their projects to the database. Over time, its founders, Casey in particular, have added features that make it ever more useful and, frankly, enabling.

That’s only one fairly obvious and easy to use feature. There is so much information available and so many different ways to get at that information that a new user can find Ravelry intimidating, to say the least. For knitters and crocheters who came to the yarn hobbies through the model of making the projects in the booklet that the yarn manufacturer designed and published to go with the yarn, the uncoupling of yarn and patterns that the organization of the Ravelry databases promotes can be daunting. Local yarn stores offer classes on navigating Ravelry for the new knitters or the seasoned knitters who are new to technology.

We’ll be back next week with Part 2 on the evolution of Ravelry, where we see it going, and how to leverage this powerful platform for your business. In the meantime, sign up for the Stitchcraft newsletters on the bottom of this page.