How to Craft a Better Business: Lisa Chamoff, Indie Untangled 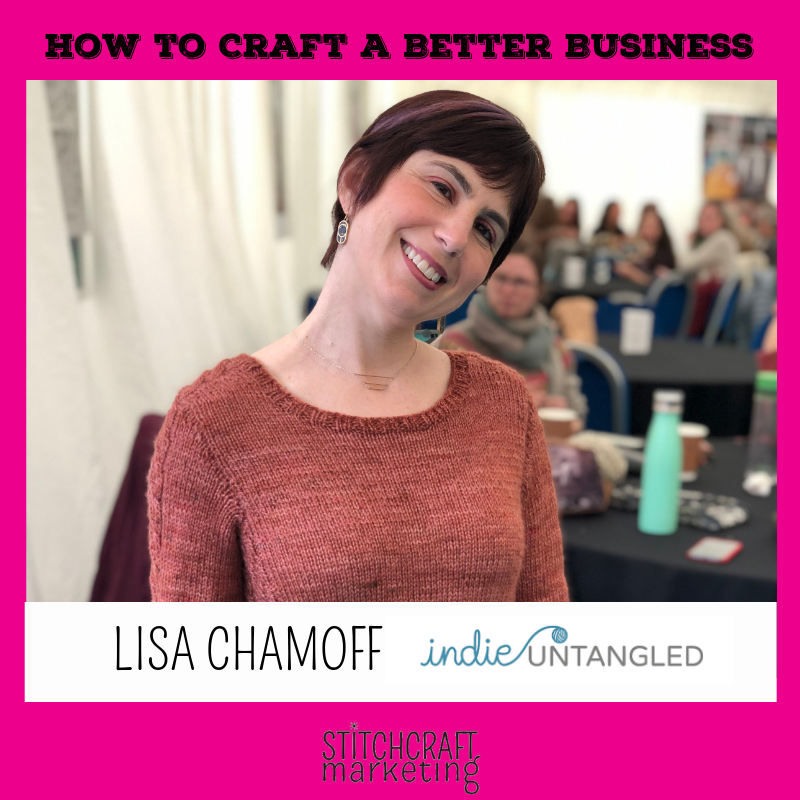 Today we’re continuing our series, How to Craft a Better Business. From time to time we interview a maker in the craft industry to learn more about their crafty business. How did they get started? What are some of their biggest challenges and successes? We hope you’ll enjoy reading and learning more from these crafty entrepreneurs!

Today we’re interviewing Lisa Chamoff, founder Indie Untangled. As a longtime journalist and knitter, she can craft both compelling copy and cabled sweaters with equal ease.

In 2014, while working as a freelance writer, she launched Indie Untangled, a marketplace and blog that promotes the work of independent fiber artisans, including yarn dyers, pattern designers, and crafters of knitting-related accessories. She writes and manages all web content and social media, writes a weekly e-newsletter that goes out to more than 7,000 subscribers and organizes events that draws hundreds of attendees. She was also the knitter on Humans of New York.

SCM: How did you get your start as a creative entrepreneur? What made you want to start your own business?

LC: In 2013, I was laid off from my newspaper reporting job. I had been knitting for about four years at that point and was obsessed with buying and knitting with hand-dyed yarn. On the Ravelry forums, I came across a discussion some dyer and maker friends were having about the recent changes at Etsy and the challenges of reaching customers when they moved to standalone websites. One mentioned she would love to see an online marketplace just for textile-related vendors, and a lightbulb went off.

At that point, I was applying to and interviewing for full-time media and communications jobs, so I realized I had time to create a website that would help knitters like myself keep track of all the indie dyers on the scene, and find out about their shop updates before they sold out, and provide a way for dyers and crafters of fiber-related accessories to share what they had for sale.

SCM: What have been some of your biggest challenges as you’ve built your crafty business?

LC: I’ve realized that I can’t do everything myself, so a big challenge has been learning how to delegate, finding and hiring the right people to help me and figuring out the best way to communicate my vision.

The Indie Untangled Rhinebeck Trunk Show, a shopping event that kicks off the weekend of the New York Sheep & Wool Festival, has also grown in popularity and unfortunately not everyone who wants to attend is able to because I haven’t found a large enough venue that’s affordable and manageable. I would like to grow the event to allow everyone to attend, but it’s only me and one other person organizing it, and I don’t want to overshadow the festival, which I enjoy attending myself.

SCM: What have been some of your greatest successes?

LC: Definitely the Rhinebeck Trunk Show. It started as me reaching out to a dozen vendors who advertised on my site, and who I knew usually attended the festival, about selling some of their products at a small marketplace the Friday before. I had always spent Rhinebeck weekend with a group of friends at the same hotel, and in the past some of the dyers in the group had brought suitcases full of yarn to sell, so I built on that idea. The event grew from about 200 people in a hotel meeting room to more than 1,400 ticketed attendees in a large event space.

I’ve also collaborated with some of my favorite dyers and designers on exclusive colorways and products, like the Knitting Our National Parks series of yarn, for which dyers create colorways inspired by photos of national parks from the U.S. Department of the Interior’s Instagram feed. Since I launched the series in June 2017, I’ve raised more than $5,000 for the National Parks Foundation by donating 10% of yarn sales.

SCM: Who has inspired you along the way?

LC: The dyers, designers and other craft business owners I’ve worked with. First of all, I wouldn’t have a business if it wasn’t for them, and seeing how successful they have been with their creative talents, and how they’ve built devoted followings in the fiber community, fuels my own creativity.

SCM: What recent trends are you most excited about in your craft industry?

LC: I’ve been excited about the focus on local and non-Superwash wool. There are some dyers collaborating with farmers and mills on some beautiful custom blends of yarn.

SCM: If you had to give one piece of advice to someone wanting to start their own crafty business, what would it be? And why?

LC: Don’t reinvent the wheel. In order to be successful, you have to figure out what sets you apart, what needs you can fill and what value you can bring to the industry. That will also help as you face competition.

SCM: What is the weirdest thing that has ever happened to you as a result of your crafty business?

LC: Some people only know my Rhinebeck event and don’t know that I’m the person behind it. I was once at a knit night at one of my local yarn shops and I was talking to the woman next to me about the festival. She asked me if I’d ever been to Indie Untangled. I had to tell her that I AM Indie Untangled!

SCM: What do you do to avoid creative burnout?

LC: I have a “side hustle” as a freelance real estate and health journalist. People have asked me if I’d want to focus on Indie Untangled full time, and I actually prefer having another job to focus on, because it ensures I won’t get sick of yarn! It can be hard to make time for everything, but I generally enjoy the work, and it helps me savor the time that I have for knitting that much more.

I also travel as often as I can. I love planning trips and exploring new places, and a change in scenery helps keep me refreshed.