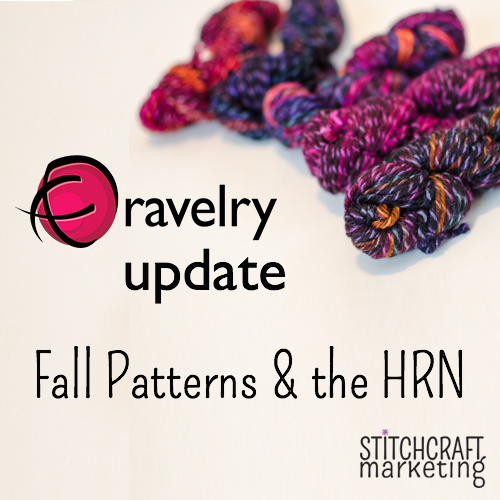 We took another snapshot of the Ravelry Hot Right Now (HRN) pattern list during the third week of September 2016. It was a particularly interesting week as it was marked by the release of the Brooklyn Tweed Fall 16 Look Book and Tin Can Knits’ new book Mad Colour, available in both print and e-book formats. While the BT Fall 16 Look Book contains patterns written specifically for Brooklyn Tweed yarns, Mad Colour’s patterns often suggest more than one option for any given pattern, encouraging substitution.

Early in the week of September 13-20, the patterns from BT Fall 16 dominated the HRN list, 7 of the Top 20. The themed collection offers 18 patterns for sweaters and accessories in parallel His and Hers versions. The differences may be as subtle as shape and size or as bold as cardigan versus pullover in this collection. On Wednesday September 14th, the BT Fall 16 patterns on the HRN list were the women’s versions of the patterns, with the exception of the men’s pullover Auster by Michele Wang, which 52 Ravelers queued that day. Norah Gaughan’s Mohr cardigan for Her was queued by 69 people on September 14, the highest number for a designated women’s pattern. Veronik Avery’s Vika, a pattern which is tagged “adult” and “unisex” and comes as only a single pattern had the highest queue number from the BT Fall 16 collection on 9/14 at 105.  By Friday September 16th, however, Vika was the only pattern from the BT Fall 16 collection still on the Ravelry HRN Top 20.

What observations can we make about pattern popularity from these statistics? Before we make any observations, we must reiterate our disclaimer that we are looking at the HRN list in snapshot moments; in this case, two snapshots taken two days apart. The HRN list is constantly on the move; get up to pour a cup of coffee while you’re looking at it, and patterns have moved up and down in the rankings just in the time it takes to sit back down at the computer. But there are still some things we can say:

Now, what about that second release? Tin Can Knits’ Mad Colour,  a collaboration between Alexa Ludeman and Emily Wessel published in both print and e-book formats, also hit the HRN list that week. On 9/15/16, 7 of the Top 30 patterns were from Mad Colour, and included two blankets, two shawls, two pullovers and a hat. Both pullovers and shawls were tagged for women, while the hat pattern Prism was tagged unisex. The blankets are aimed at babies and can be gender-targeted or gender-neutral based on color selections. So we see again a result that doesn’t surprise us: patterns for women and children far outnumber those for men. 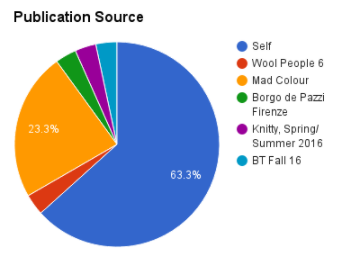 Let’s look at the comparative popularity of the Mad Colour patterns against the BT Fall 16 collection patterns by examining the queue numbers on the release date for the seven patterns that climbed into the HRN list.

Of the two pullover patterns, Wenlock and 1999, 1999 was queued by 48 Ravelers on 9/15/16. It also has 385 favorites. Wenlock, which was originally released in Pompom Quarterly’s Fall 2014 Issue 10, entered 30 queues on the same day, but it has 2070 favorites. It also has 54 projects, while 1999 has only 21 projects. Still, considering Wenlock’s 2-year head start, the relatively small difference in project numbers is notable. Ravelers can express their interest in a pattern in these three ways: by favoriting it, by putting it in their queues or by creating their own project page for it. In a general sense, those reflect three levels of engagement: I like it; I want to make it: I have committed yarn and time to it. Both favoriting and queueing, however, are ways by which Ravelers bookmark a pattern to come back to it later; creating a project page demands a little more investment and thus may be a truer measure of a pattern’s popularity.

The two blanket patterns that appeared on the HRN list were newly published in this collection: Polygon, a modular blanket made of individual hexagons, and Marley, which is written for a number of gauges to be a stash-buster project. What is interesting, however, is that another Tin Can Knits blanket pattern, Fly Away, also climbed into the HRN during the third of September although it is not part of the Mad Colour collection. The new release may have led Ravelers to explore Tin Can Knits’ back catalogue of patterns as well. Fly Away was queued 65 times during the week under consideration, 17 months after its initial release. Tin Can Knits’ most popular blanket pattern, POP Blanket, was included in Mad Colour. Its numbers dwarf their other patterns: 15093 favorites, 982 projects and 2999 queued. While it had a small spike in queues during the release week, the numbers reflect enduring popularity as it was originally released more than four years ago.

Since the BT Fall 16 Look Book and Mad Colour were very different collections, comparing their statistics head-to-head doesn’t offer much useful information. Let’s put the most popular pullovers from each collection side by side and compare the numbers:

As noted above, Wenlock has been available for two years already since it was originally published in Pompom Quarterly Fall 2014, which included children’s sizes.  But Vika was also introduced in 2014 as a child’s pattern in BT Kids. Vika and Vika for Adults are two separate entries in the Ravelry pattern database, while Wenlock is a single pattern entry. Still, we see more intent to knit the adult cabled pullover than the gradient-yoke pullover. Beyond that, it’s hard to draw conclusions. We are impressed that there are already 10 projects on the needles a week after Vika for Adults debuted!

Traditionally in the yarn industry, patterns are developed to drive yarn sales. The two collections published during the third week of September 2016 differ from each other in this aspect. BT Fall 16 is a collection of designs written to be knit from Brooklyn Tweed’s own line of yarns. A couple of the patterns allow for Loft, the fingering weight yarn, to be held doubled, or substituted with Shelter, the worsted weight yarn, but the specified yarns for the patterns are Brooklyn Tweed. When you visit the Yarn Ideas tab for these patterns, however, like the 10 Ravelers who have already started Vika, a different story emerges. It’s the pattern that seems to matter–only one of the 10 projects in the database so far actually uses Brooklyn Tweed SHELTER. Some projects don’t specify the yarn used; each of the Yarn Ideas listed has only been used in one project. But there may not be a statistically significant mass of projects yet to make too much of this.

Tin Can Knits’ POP Blanket, however, specifies Noro Kureyon and Cascade Ecological Wool, and the point of the pattern is the long color change in the circles, so substitution is a little more limited.  Taking a look at the Yarn Ideas tab for the POP Blanket shows that by far, the recommended yarns are the most-commonly used, but Ravelers have found other yarns that allow them to achieve the look. Nonetheless, the POP Blanket is definitely a pattern that results in sales of Noro Kureyon, and to a slightly lesser degree, Cascade Ecological Wool.

The Rest of the Story

What about the other patterns on the HRN list during the third week of September? Most of them were new releases, likely popping up in Ravelers’ personal Highlights lists and thus being favorited or queued. Three of the patterns, Monie Ebner’s Wolfgangsee, Tincanknits’ Fly Away and Kaylie Dawn’s crocheted shawl pattern Mostly Harmless, were all featured on Ravelry’s Community Eye Candy: Designers’ Picks post that week. In fact, this feature is probably more responsible for the bump Fly Away saw than the coincidental publication of Mad Colour that same week. Others were having a limited-time price special, whether it was free or simply reduced. The oldest pattern to appear on the HRN list that week was Gudrun Johnston’s Little Wave Cardigan, originally published in Brooklyn Tweed’s Wool People Vol. 6 from November 2013. It saw a queue spike of 100 that week, probably bumped by Stephanie Pearl-McPhee’s (the Yarn Harlot) declaration of this pattern as her Rhinebeck sweater on September 14. At the same time it was also mentioned in the comments  on the Mason-Dixon knitting blog during Kay Gardiner’s search for the perfect granddad cardigan, as well as in the thread on their Ravelry discussion board.

New releases are at the heart of the Ravelry HRN list. While it can be influenced by what’s going on in the world of knit bloggers or offering a special deal on a pattern, it’s clear that new publications are going to dominate the HRN for at least a couple of days. Whether they are collections by a single designer or a group of designers under one title, it is likely that a handful of designs from the same source are going to be taking up positions on the HRN list. But both the sheer number of Ravelry members and the volume of pattern publication means that no single design is going to remain on the HRN list for very long. As big as the designer names are for both BT Fall 2016 and Tin Can Knits’ Mad Colour, the release date causes a spike in popularity. If an older pattern returns to the HRN list, you can bet there’s been some kind of reference to it in the knitting world at large that brings it back to knitters’ attention.

So if you’re a pattern designer, how can you make the HRN list work in your favor? It’s hard. You may want to try to find out if there are other major releases scheduled for the date you’re considering and try to move your release a couple of days earlier or later. But if it’s your fall collection, releasing it in May doesn’t make sense. You are going to be competing for attention, so you might as well pick a day that works for you. Should you promote your release with a special price? Neither the designs from BT Fall 2016 nor from Mad Colour offered any kind of discount, but they still dominated the HRN on their release dates. If you are not yet a household name as a knitting pattern designer, a limited-time special price might get your work before more eyes. It can be a strategy to build your reputation, but don’t undervalue your work. A professionally-written and produced pattern that has been tested shouldn’t be given away.

If you own a yarn company, what does the effect of new releases on the HRN list have to tell you? We’re seeing that knitters are inspired by great patterns, while also interested in interpreting the patterns through their own color and yarn sense. A lot of it comes down to the split between process and product knitters. To make a broad generalization, process knitters fall in love with the yarn and look at patterns to find something to make with it, while product knitters fall in love with the garment and buy the yarn to make what they see. Good design will definitely sell patterns and it will sell yarn to the product knitters.  To capture the knitters who come via the yarn, you want to work with designers who are inspired by your sense of color and texture, because their patterns will be the ones that show knitters what they can do with that yarn of yours they couldn’t resist. Creating that kind of fruitful partnership is one of the services we offer.

At Stitchcraft Marketing, we can help you with everything from pricing to production for your designs or help you find the right designers for your yarn. Contact Leanne@stitchcraftmarketing.com for more information on how we can make magic for your brand.