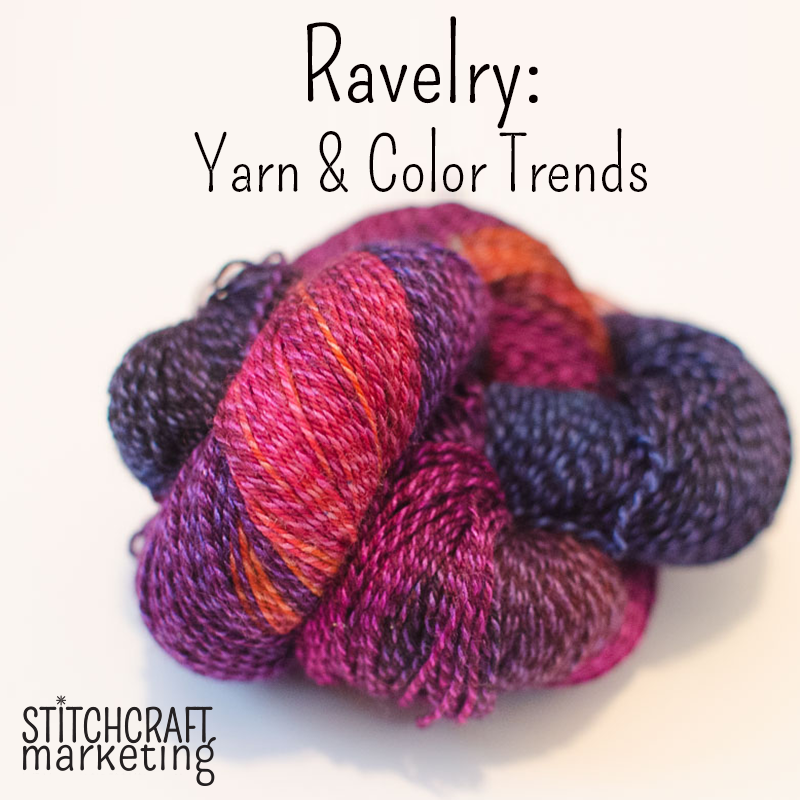 When we publish these Ravelry updates, our goal is to share the insights we have gleaned from studying trends in patterns, yarns, projects and designers as they are reflected on this user-driven fiber-centric social media site. There’s no denying that Ravelry has changed the yarn, fiber and knitting/crocheting design industries forever, and keeping up with what’s going on there is an essential part of running a yarn-craft related business in the 21st century.

Since we’ve looked at both patterns and yarns with the Most Projects, and recently, the Hot Right Now pattern list, we thought we’d take a snapshot look at the Yarns New to Ravelry list this month. This is a list that you can filter by Most Projects, Best Match or Highest Rating. We’re going to look primarily at the new yarns that appeared on the Most Projects filter; because they are newly-entered into the Ravelry yarn database, it’s not going to be a huge number like it would be for a perennial standard.

A caveat before we begin, however: since Ravelry is user-driven, we are looking at yarns that Ravelers have chosen to enter into the collective database, that they haven’t found a match for in what is already there. So there are filtering processes already at work before we look at the list; evaluate what we say in these Ravelry updates with that thought in mind.

We’re particularly interested in looking at color amongst these Yarns New to Ravelry. Depending on what designers or yarn companies you follow on social media, you may have spent the summer seeing tags like #specklesaresohotrightnow. Is that actually true, or is it an attempt to make something happen? Are the influencers actually influencing yarn popularity? If it’s not being driven by designers, what is driving yarn popularity? We may not come up with any definitive answers, but we’re going to do our best to tease out what’s going on with yarn and color right now.

We looked at the first 20 yarns listed on New to Ravelry with the Most Projects during the second week of August 2016. All of them had been added to the Ravelry database by members during June or July 2016, giving them at most a six-week presence on Ravelry. All standard yarn weights were represented from lace to super bulky, with the exception of chunky/bulky, (an ambiguous category, anyway.) The fiber was predominantly wool or blends of wool and acrylic, with one 100% cotton yarn, one cotton-acrylic blend, one cotton-silk blend and one yarn that was 100% silk. 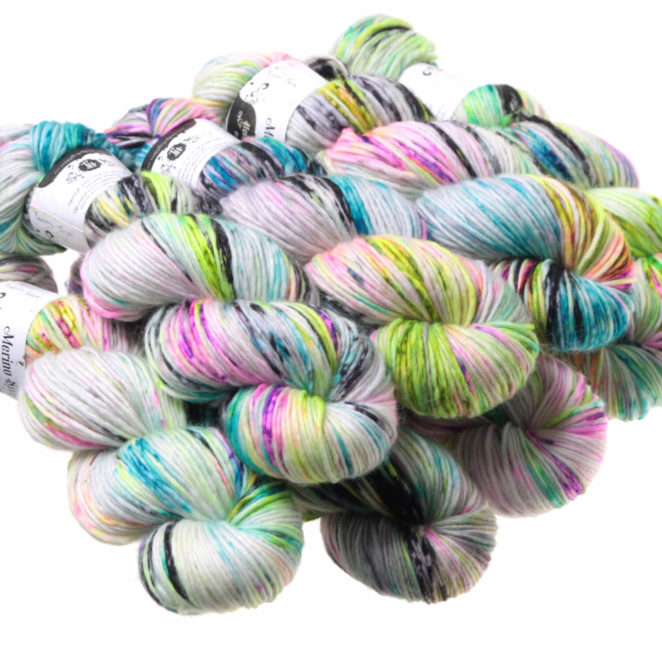 Issues of Color
What we find interesting is looking at both colors and manufacturers. We divided colors into solid, semi-solid and variegated, and split manufacturers between what we considered large commercial manufacturers and independents. Two of the yarns on the list are made for the house label of two specific yarn stores and although that might result in a larger run than an indie dyer, we still considered that independent rather than large-scale commercial.

Where do you put a manufacturer like Malabrigo? It’s kettle-dyed, which is not hand-painted, but still requires a closer human touch than automated commercial dyeing. Malabrigo’s brand new super-bulky thick-and-thin yarn with a thread binder, Caracol, is the entry on the New to Ravelry list. It comes in solid, semi-solid and variegated colors, hitting all three categories. Although it entered the Ravelry yarn database on July 20, 2016, there are already 46 projects using it, with the majority being the variegated colorways. Creative Ravelers are using it in patterns where they might have used Malabrigo Rasta in the past, with most projects using just one skein (cowls and hats) or two skeins (shawlettes). 14 Ravelry users have given Caracol a 5-star rating in the month it has been part of the database.

Malabrigo Caracol lies at the intersection of large and small manufacturers, solid and variegated colorways with natural fibers and a popular weight and texture. Everything points to this new yarn being a hit for Malabrigo. They are dyeing and shipping it as fast as they can.

The Mineville Wool Project’s Merino DK Single was 20th on the list with 7 projects but already stashed 18 times. Its provenance as a special project of Fleece Artist Yarns may account for its rapid popularity, as Fleece Artist is well-known. The Mineville Wool Project’s limited availability in small-batch lots creates a sense of urgency. If you want it, you’ll need to get it now, or hope that your local yarn store has gotten it and still has enough for the project you have in mind.

Commercial Manufacturers
The first five yarns on the New to Ravelry list are all by commercial manufacturers. Two of the yarns are Knit Picks products, Luminance and Mighty Stitch Super Bulky. Knit Picks products are private label, milled to their specifications. Luminance, number 1 on the list during our survey period, is a 100% silk laceweight yarn in the saturated solid colors one expects from a silk yarn. It had only 43 projects, but had already been stashed 205 times since entering the Ravelry yarn database in June 2016. Mighty Stitch Super Bulky, at number two, is Luminance’s yarn opposite. A blend of 80% acrylic and 20% wool, it is super-bulky and comes in 18 solid colors from white to black with pastels, primaries, jewels and neutrals in between. The gap between the number of projects and number of stashes from Luminance and Mighty Stitch Super Bulky is interesting. Mighty Stitch Super Bulky has 23 projects but only 60 stashes. The difference suggests a certain rarity mindset which we noticed in our survey of the Top 25 Yarns with the Most Projects on Ravelry; inexpensive yarns with stable dyelots have fewer stash entries than perceived luxury/hand-dyed yarns, which may not be easily obtained. (Maybe listing those yarns increases their potential value on the secondary destash market?)

DROPS Fabel Uni Colour joins the Knit Picks yarns as being the other exclusively solid-colored yarn in the first five yarns. A fingering-weight blend of 75% wool and 25% nylon, its 17 projects were primarily socks, including a sock blank knit out of its natural colorway for dyeing.

Joining Malabrigo Caracol in the first five yarns as the other commercially-manufactured variegated yarn is Trendsetter Yarn’s Transitions DK, a 52% cotton/48% acrylic blend with a long color run for gradual transition. Its 18 projects at the time of the survey were all shawls, many of them the Transitions Boxed Rib T Scarf, in which the color transition served as focal point.

Indie Yarn Dyers
As we move down the list, positions 6 through 20 see only three commercially-manufactured yarns with the rest being small-batch indie dyers or single LYS private labels. The indie dyers are all doing semi-solid and variegated colors, with the exception of Fancy Tiger Crafts Junegrass DK, an undyed blend of 75% Rambouillet/Merino cross/25% Wensleydale wools. The product of two Colorado sheep ranches, Junegrass DK is a yarn with terroir, a product of specific sheep raised in a specific landscape. Its single undyed color is a layered gray resulting from the white Rambouillet/Merino cross and the dark Wensleydale.

Of the hand-dyed yarns on the Top 20 New to Ravelry list, only one, Aoraki, lists “speckled” as an attribute that could be found by a keyword search. Because the information is supplied by Ravelers themselves, who may or may not choose to upload a photo of every colorway of a particular yarn they’ve purchased, the New to Ravelry list is not a representative sampling from which to determine colorway trends. The best we can say from this list is that yarns created by indie dyers were uploaded more often commercial yarns in the second week of August 2016.

From an LYS Perspective
So Ravelry didn’t necessarily reveal to us, at least through the New to Ravelry yarn list, whether speckled colorways are the hottest thing out there right now. Instead, we’re going to offer some observations from the field, a local yarn store where the yarns ordered at TNNA in June have been arriving over the last month. This particular store carries both Hedgehog Fibres and Madelinetosh; a small indie dyer, Collier and Black, as well as large commercial brands such as Plymouth.

By “speckled” we mean a colorway in which either an undyed base color or a dyed background color is overlaid with small spots of different colors, but the predominant color is the base/background. “Speckled” differs from variegated in the size of the runs of the contrasting colors. Speckled yarns will not stripe, even at the circumference of a sock or glove.

The store ordered the entire Fall 2016 palette in Hedgehog Fibres Skinny Singles and Sock; also the whole Fall 2016 palette of Madelinetosh in Tosh Merino Light, Sock, Pashmina and Silk Merino. Both these brands, one dyed in Ireland and the other in Texas, offered lineups in which speckled colorways made up one-third to one-half of the total number of new colors. Collier and Black was brought into the store for two specific reasons: the dyer is relatively local, and she specializes in speckled colorways. Right now her operation is not big enough to be offering seasonal colorways.

At the commercial end of the scale, the store chose to bring in Plymouth’s Worsted Merino Superwash Hand-Dyed, a yarn whose newest featured colors all fall into the “speckled” category. (It is interesting to note that the more traditional longer variegations of Worsted Merino Superwash Hand-Dyed ended up in this store’s 50% off bin; yet they were willing to bring it back in in the speckled colorways.) Likewise, the store reordered Plymouth’s Happy Feet 100 Splash Hand Dyed, whose bright speckled colorways flew out of the store the first time it appeared. The same is true for Plymouth Baby Alpaca Grande Hand Dye’s most recent colors.

We would venture to say that indie dyers experimenting with color and technique created the speckled look, which inspired designers, who created patterns that took advantage of the unique characteristics of yarns dyed this way. The popularity of the patterns and the yarns used in them caught the attention of the large companies who developed yarns that would work in the patterns, making the speckled yarn phenomenon even more widespread. There’s no way to prove this, but from an LYS perspective, we saw the dyeing technique with the independent dyers first and then from the big companies.