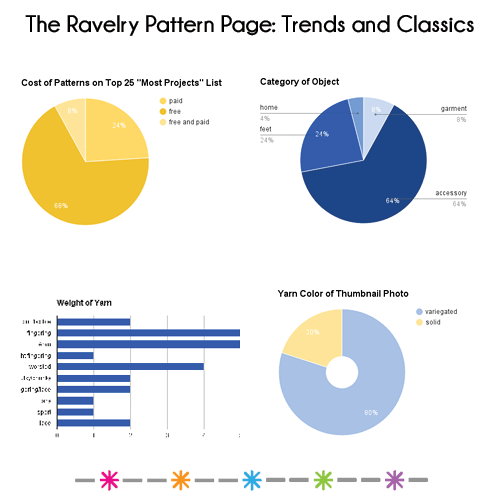 While Instagram and Pinterest can spike interest in a particular knitting or crochet pattern, Ravelry continues to be the most influential social media site for the yarn industry. Its user-generated database catalogues both the new and the old, the hot and the classic, in yarns and patterns for both crafts. Ravelry ranking can make or break a new designer or an indie hand-dyer, depending on user comments and ratings.

If you want to see what the latest thing is, all you have to do is go to the Top 20 list on the Patterns page and look at the Hot Right Now patterns. The Hot Right Now list shows which patterns Ravelers are looking at the most often on a given day. There are a lot of factors that can influence Hot Right Now (HRN), which can change on an hourly basis. For example, just after the publication of a new issue of either a print or an online magazine, many of the patterns featured in it will climb into the HRN as knitters check out what’s new. When a designer offers a pattern free for a limited time, that pattern may jump into HRN as Ravelers download it during the free period. New patterns issued by popular designers come to the attention of Ravelers who have made their previous designs through the Your Pattern Highlights feature; Ravelers look at the new designs and the patterns rise in the HRN rankings. Starting a KAL or CAL (Knit- or Crochet-Along) can send a pattern into the HRN list. Casey Forbes (Code Monkey on Ravelry), the programmer behind Ravelry, deliberately changed up the algorithm so that the list would reflect up-to-the-minute trends in patterns based on these varied factors (You can read the thread about it here).

Just as interesting as what’s Hot Right Now are the patterns that having staying power. Filtering the Patterns list in Advanced Search by Most Projects yields a list of the patterns (from most to least) that Ravelers have cast on and created a Project Page for in their personal notebooks. Investigating the Patterns list in terms of Most Projects reveals what yarn crafters consider ‘classic’ and offers yarn manufacturers and retailers insight into the kinds of yarns and projects for which they can anticipate stable demand over time. We’re going to look at that list and try to break down what makes these patterns so popular.

What Do Knitters Want to Knit? 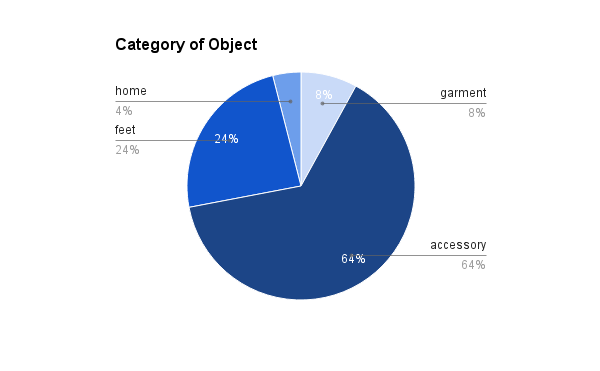 It’s very clear that accessories are by far the favorite item in the Top 25 Most Projects. Accessories include hats, mitts, scarves, cowls and shawls. If you count socks and slippers (the “Feet” category above) as accessories (although they are usually less visible), 88% of the patterns on the list fall into the accessories category. Why might this be so?

Accessory projects offer knitters the pleasure of knitting, the gratification of a quickly finished object, the possible virtue of knitting from stash or leftovers while also offering the thrill of splurging on a skein or two of a luxury yarn or a one of a kind color from an indie dyer if stashdiving doesn’t come up with any suitable yarn options. The fact that they are generally more quickly completed contributes to the ranking of their patterns: they simply offer more time for more finished projects.

What Weight of Yarn Do Knitters Prefer to Use? 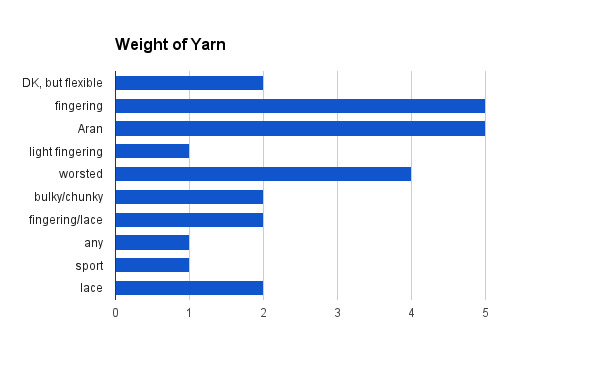 Variegated or Solid? Where Knitters Stand on Color

Eleven of the projects in the Top 25 Patterns with the Most Projects specify a handpainted yarn; another five use a commercially-produced printed or self-striping yarn. Five specify a solid yarn; and the remaining four leave it up to the knitter to decide. When you look at the list in thumbnail photo form, however, it’s clear that knitters love their color. An overwhelming majority of the list features photos showing the project rendered in a semi-solid or otherwise variegated yarn: 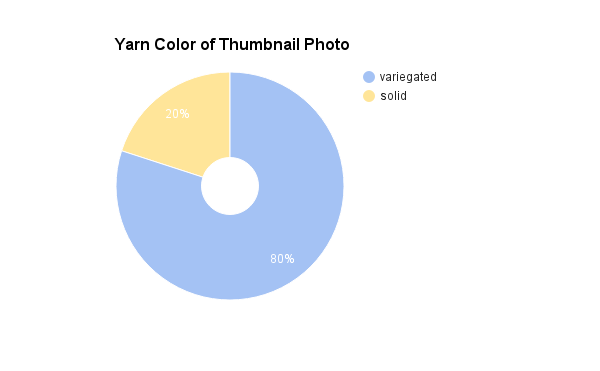 In addition, four of the patterns in the Top 25 feature stripes or color-blocking as a design element: Jared Flood’s Turn a Square and Noro Striped Scarf; Veera Välimäki’s Color Affection and maylin Tri’Coterie’s Wingspan.

The 25 patterns on the Most Projects List celebrate the creativity of dyers as well as knitters. So many of the patterns showcase the beauty of a hand-dyed yarn, including the #1 pattern on the list, Elizabeth Zimmermann’s Baby Surprise Jacket. Let’s take an in-depth look at this particular pattern to see why it endures.

There are more than 24,000 projects knit from the Baby Surprise Jacket pattern entered into Ravelry. Over the week when we examined these statistics, the number of projects for this pattern went from 24,201 to 24,244 – in only five days. It holds the lead over the second-place pattern, Martina Behm’s Hitchhiker shawl, by more than 2,000 projects. Between this lead and its ongoing growth, the Baby Surprise Jacket is likely to hold the top spot in Most Projects for a long time. What is it about this pattern that makes it such a classic?

First, it’s a pattern that has been around for a long time. Originally published in 1968, the Baby Surprise Jacket is Elizabeth Zimmermann’s most famous pattern, and one could argue that EZ is the knitting world’s most famous designer, or at least its Founding Mother. Its longevity is definitely part of its popularity. But there’s more to it than that: it’s also a good, well-written pattern. Knitters have had success with it over the years, and have communicated their pleasure to their knitting friends and its reputation as a “good knit” spread. Its unique construction adds to its appeal. Process knitters want to make it because it challenges the part of their brain that needs to understand how it comes together. Product knitters want to make it because it’s cute without being trendy. Newer knitters want to make it because it’s all garter stitch. Veteran knitters make it the first time because it’s one of the merit badges of being a knitter, but they come back to it because it’s fun, quick and endlessly customizable.

The yarn requirements add to the Baby Surprise Jacket’s appeal. As written, the pattern calls for a DK-weight yarn, but varying the yarn weight results in smaller or larger jackets without doing a great deal of arithmetic (Schoolhouse Press has done the arithmetic for knitters and the pattern is available as a single publication with sizes ranging from newborn to adult). Its unique construction shows off the beauty of a hand-painted or hand-dyed skein of yarn, making it look like a much more complicated garment that it really is. For the frugal knitter, it’s a wonderful striped jacket when knit with leftovers. Knit with a synthetic or blend, it’s an easy-care garment that can stand up to the rigors of baby and toddlerhood. Knit in a luxury fiber, it’s an heirloom piece that can be passed down from one baby to another. If you take a look at the Yarn Ideas tab on the Baby Surprise Jacket pattern page on Ravelry, the first row demonstrates the range of yarns that work for this pattern: the most popular choice is Cascade 220 Superwash, a mid-range workhorse of a yarn. The next most-popular choice is Blue Moon Fiber Arts Socks that Rock Mediumweight, a hand-dyed, high-twist sport weight whose 402 yd skeins easily make the jacket in its smallest size. The next three of the top five are Koigu KPPPM, Bernat Baby Jacquards and Plymouth Encore Worsted, encompassing another hand-paint, a big-box store acrylic and a sturdy acrylic-wool blend.

So we can conclude that the Baby Surprise Jacket’s enduring popularity stems from the length of time it has been in print; the versatility of its yarn requirements; its reputation as an interesting knit with clever construction; and the fact that it’s stinking cute. It’s a pattern that deserves its first-place showing.

One surprising thing about the Baby Surprise Jacket is that knitters are willing to pay for the pattern to knit it. Granted, it has appeared in many of EZ’s Schoolhouse Press publications as well as a number of magazines, so there’s a good chance it may already be in an avid knitter’s pattern library, but it continues to sell as a stand-alone pattern, too; a DVD and streaming video version are also available.

However, most of the patterns on the List are available for free. A couple, like Cookie A.’s Monkey socks and maylin Tri’Coterie’s Wingspan are available in their original publication formats for free, but can be purchased with additional sizing or variations in updated versions. 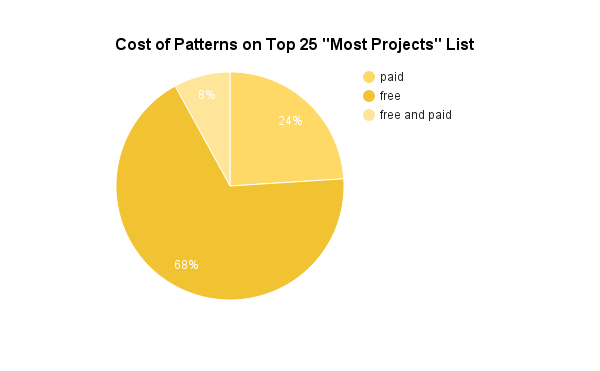 A number of the patterns that are freely available originally appeared in Knitty, the first online-only knitting magazine. In a later post, we will look at some of the major influencers, including Knitty, that helped drive the rankings of the Top 25 Patterns with the Most Projects List. In the meantime, how does this list affect your marketing efforts? If you’d like some help positioning your products as what knitters want, contact Leanne@stitchcraftmarketing.com.