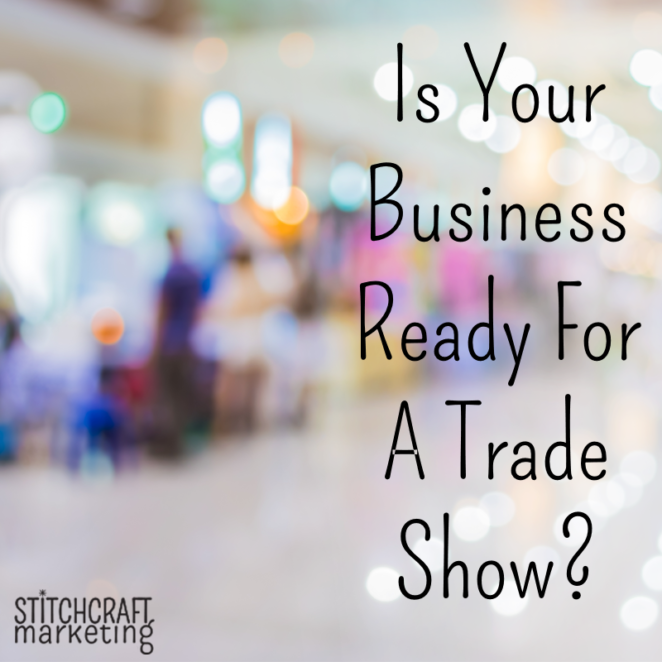 Your craft business has made the leap from Etsy shop to full-fledged business. You now have a few wholesale accounts and your products are showing up on Pinterest and Instagram. Now it’s time to take it to the next level.

One way to do that is to exhibit at a trade show. It’s a big investment of time and resources–you have to rent space on the trade floor and pay to get yourself and your merchandise there–but it’s also a great way to introduce yourself and your products to retailers, as well as to designers and teachers who may want to use your products in their work.

So what trade show should you attend and what can you expect to find there? We look at two of the biggest ones in the crafts industry to help you plan your next move.

First, some history. The National NeedleArts Association began as an effort to create an environment where retail stores would have a place to come and discover all aspects of the needlearts, according to Barry Klein. Klein, who was president of TNNA from 1991-2000, has been part of the association since its beginning.

Needlepoint, counted cross-stitch, embroidery, knitting, latch hook and tatting were the first crafts represented by the association, but large and small companies, chain and independent retailers all came to the same shows.

The trade shows began as small, regional events in hotels and grew from small convention center shows to large convention center shows scheduled around the country 6-8 times a year. Expanding TNNA to include other crafts became difficult as the difference between pricing structures geared to big-box stores versus independent retailers made it “impossible to have one show that did justice to both audiences as the discussions, while similar, are different in the degrees of purchase,” according to Klein.

So the Craft Yarn Council evolved as a separate group within TNNA and eventually split off to create the Craft and Hobby Association (CHA), which in 2017 has rebranded as the Association for Creative Industries (AFCI).

AFCI encompasses paper crafts, including card-making, origami, scrapping, stamping and lesser-known paper crafts like quilling and scherenschnitte; all kinds of painting on various surfaces; fabric crafts like applique, quilting and sewing; beading and jewelry; leather and metal crafts; home decor and woodworking. They also have special-interest groups for Designers and Digital Content.

The National NeedleArts Association brings together manufacturers and vendors of yarn and yarn-related crafts, including crochet, knitting, latch-hooking and punch-needle, and weaving; fiber crafts, including felting, locker-hooking, rug hooking and spinning; decorative needle arts and the designers who create patterns, kits and canvases for crafters to make.

The TNNA Product Segment groups are divided into Counted Thread and Embroidery, Needlepoint, Spinning and Weaving, and the Yarn Group. AFCI can include all the crafts that attend TNNA, but TNNA does not include all the crafts that are represented at AFCI, because many of the companies do not package or price their goods for the scale of retail TNNA serves. The independent local retailer who attends TNNA as a buyer traditionally does not buy products at the volume that the big-box chain stores do.

Membership in either trade association gets you access to their trade shows, educational events and various professional affiliations and benefits. Both have different membership categories defined by your role in the industry: are you a retailer, a manufacturer, a designer, a distributor, an instructor, a sales representative or someone involved in communication about the industry, like a blogger, a marketer or a trade publisher? People from all of these categories belong to each trade association and attend the shows, whether as exhibitors with booth space or visitors eager to see what the exhibitors have to offer.

Retailers come to decide what new products to order for their shops; designers come to connect with the vendors with whom they can collaborate as well as with retailers who can sell their designs; vendors come to show their wares and talk to retailers about how to sell them. Everyone has something to gain from making connections within and across membership categories at the big shows.

Who, What and Where: The Big Trade Shows

TNNA mounts two major trade shows each year: the Winter Trade Show in January, on the west coast, and the Summer Show in June, in the Midwest (it’s back to Columbus for 2017, June 10-12). In addition to the exhibition floor, attendees can come as early as June 8 for professional educational opportunities. A sampling of the classes offered at the Winter Trade Show in San Jose, CA ranged from business topics like accounting, inventory, marketing and personnel strategies to hands-on technique classes that retailers can in turn introduce to their customers. Class tuition is in addition to trade show registration fees.

Pre-Show Events on the Friday before the trade floor opens are open to all registered attendees and serve as a showcase for new products and services that you can check out in detail on the floor. They’re a fun way to mix, mingle and connect with people before you get overwhelmed by the vast array of exhibitors and booths.

If you are attending as an exhibitor, you are eligible to purchase Exhibitor Add-Ons which enable your products to be featured in an event like the Fashion Show or the SampleIT! product pre-show sale. There are all kinds of sponsorship and promotional opportunities for you to promote your business’ name and products over the course of the semi-annual trade shows.

AFCI produces their big trade show, Creativation, annually; the 2018 show is scheduled for January 18-22 in Phoenix. The 2017 show featured the announcement of their new identity as the Association for Creative Industries and a keynote address that revealed the results of their 2016 Creative Products Size of the Industry Study–$43 billion (the full study is available free to members, or for purchase). Creativation includes education with hands-on product classes as well as business topics, two days before the exhibition floor opens.

AFCI encourages industry members to become exhibitors because of the exposure they will gain and the contacts they will make. Creativation is the show that buyers from major big-box craft chains like AC Moore, Hobby Lobby, Joann’s and Michael’s attend, as well as independent retailers. It’s the place to bring your products if that’s the market you want. It’s also where to connect with the influencers who can put your products on the craft industry map. As with TNNA, becoming a member of AFCI reduces the cost of exhibition space at Creativation.

At Stitchcraft Marketing, we make magic for your brand! To find out how our services can help you take your craft-related business to the next level, Click here to contact Leanne.