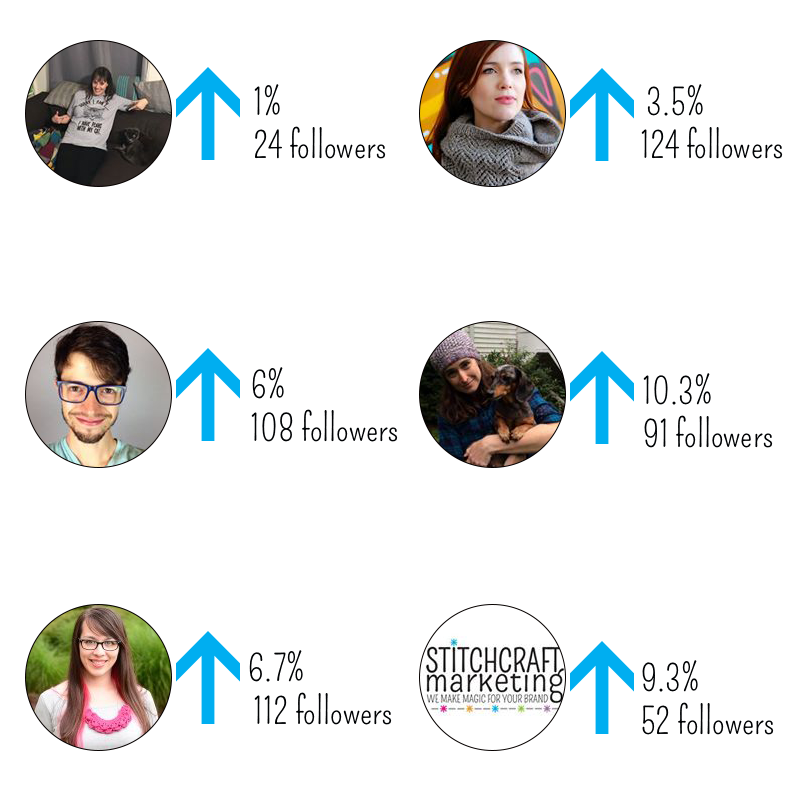 If you take any online business class or read an article about growing your brand’s Instagram following, they’ll all say that one of the best ways to gain new followers is by engaging with them. This means liking, commenting, and following people who use related hashtags to your business, which can be quite time consuming!

There are many Instagram automation services out there, despite the fact that they are not sanctioned by Instagram (for more information, read their terms of service here). In other words, using a bot that violates Instagram’s terms of service could potentially affect the status of your account, resulting in a suspension or even termination. If you decide to use an automation service, proceed with caution.

Last week, our team experimented with Instaplus, an Instagram automation service which seemed to offer a good amount of customization. We didn’t want one that would auto comment, because we didn’t want to feel inauthentic. However, less personal tasks such as liking posts and following users was something our team was interested in, so we each used our personal Instagram accounts to try out Instaplus. Read on for our results and conclusions.

Stefanie’s Notes
I was pretty conservative with setting up my automation and set it to like 50 posts for the #yarnlovechallenge I was participating in at the time; I also had it follow 10 new people daily who were using that hashtag and had a minimum of 1,000 followers. I netted 24 new followers during those 7 days (usually I get 1-3 new follows in the course of a week); curiously, most of these follows did not appear to be people who were following me back – in fact, most of them had a very small number of followers, though a few were fiber-related business accounts. Clearly, I erred on the side of being a little too cautious, but overall I was satisfied with the results.

While I didn’t have a hard time with the setup process, I quickly discovered that the times I thought I had specified for each action were clearly in a different time zone – I think it would start the automating process around 2am my time, which isn’t the end of the world, but probably not optimal. I’d say my posting frequency (at least 1-3 photos on any given day) and subject matter (yarn, WIPs, cats, craft beer) was about the same as a typical week for me.

Julie’s Notes
I am an infrequent poster- during our trial week, I only posted 3 new photos, so my results were definitely from the Instaplus activity rather than much effort on my part. I focused more on likes as opposed to likes + follows, and set my parameters to focus on users that had less than 8,000 followers. I doubt very much that anyone with more than 8,000 followers checks out the feeds of everyone that likes their photos, although I could be wrong. It stands to reason that anyone with under 8k followers would receive a moderate number of likes on their own photos and then go and check out other feeds. While functionality is fine, something about the Instaplus site feels a bit shady overall – for example, if you click on the privacy policy, which is only at the footer of the main page and nowhere else, you get ….. nothing. There is no privacy policy that I could find on this site. The terms are very basic, and don’t explicitly say that the won’t sell any of your information. Yikes!

Benjamin’s Notes
I am an active user on Instagram, I love interacting with others by commenting and liking posts. I was excited to see what Instaplus could do for my following by increasing my interactions even more. The setup was mostly intuitive, but with a lack of a tutorial or FAQ I felt like I needed to handle most of it on my own with trial and error. At first, I had no clue at first that the time zone was not displayed in my local time, so my Instaplus “Tasks” started running at about 3 am Mountain time, which didn’t have any effect on the number of posts that the task liked/followed but I do wonder if it had an effect on the locations of the people that I followed.

I used the hashtag #knittersofinstagram as my focus, and followed/liked 75 posts when it ran. During the week, I posted the same number of posts as I normally do, and interacted with my feed much in the same manner as well. I noticed a 6% increase in followers with over 100 new followers in a week.

Rebecca’s Notes
After a bit of a headache in setting this up – I had to reconnect my account several times and the chat help function felt like a computer, not a person on the other end – I chose to set Instaplus to run at the same time, with the same parameters and hashtag, each day: 75 likes & follows per day with #knittersofinstagram. I thought it would run at 1pm each daily but found it was actually running around 5am. Maybe that was for the best, making my account seem to be active more often during the day when combined with my own activity? During the week, I used Instagram as I normally would: post to my account, liking and commenting on photos in my feed throughout the day. I didn’t use the hashtag in my automation set up (#knittersofinstagram) in my daily posts, nor did I look to it outside of my feed. I saw a growth of 10.3% in my followers over the week, 91 followers! This was a really big bump for me as I average 1-2 a week. These followers do not have big accounts of their own, they were on par with my account. I saw 1 or 2 new follows from “bigger name” accounts, but I may have followed them first prior to this experiment. I would be curious to run it again after my followers pass 1,000.

Mari’s Notes
I was really interested to see if extra effort would render better results. One of the aspects I really liked about Instaplus is that I scheduled all of these posts out on Monday, and it was easy for tasks to repeat every subsequent day. The downside is that you can’t run two tasks at the same time (I learned this the hard way), and it also won’t let you run two tasks with the same hashtag, so I had to be creative in setting this up all on day one. You can see my table below:

Leanne’s Notes
It took me about 45 minutes to set this up for the whole week, but it seems like maybe there wasn’t much difference between the extra effort/variation in the hashtags in what I set up compared to my colleagues. I’m curious to see if variation would be more relevant/important in a long term use of the Instaplus automation.

For the Stitchcraft Marketing account, we had a different focus since we are a B2B company, whereas the personal accounts are more B2C focused. We used the hashtag #yarndyer to focus on indie dyers and only followed/liked 50 posts per day. Due to the same time-zone issues noted above, the task ran everyday at about 3 am.

This was the smallest account that went through this process and by the end we saw the second highest growth at 9.3% with 52 new followers. We attribute the smaller number of followers to the more obscure hashtag. It would be interesting to try this again using different parameters. 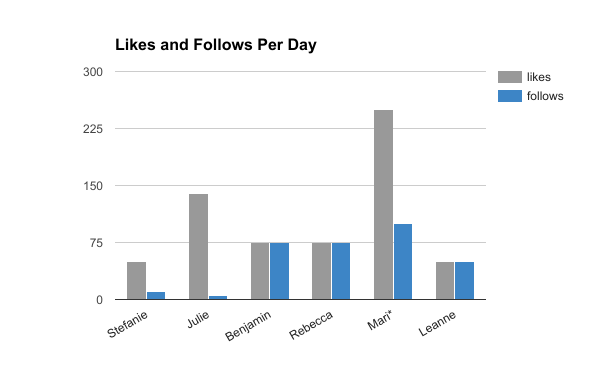 *these are averages, see Mari’s table above for more detailed info. 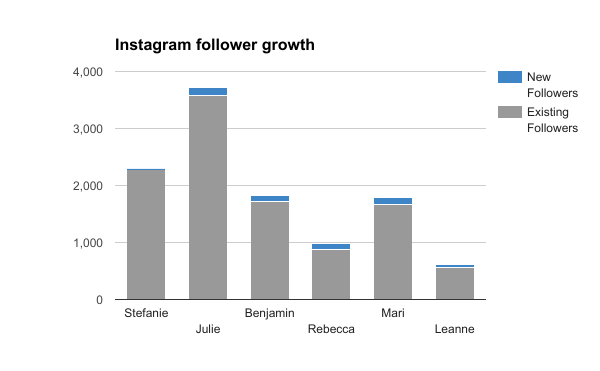 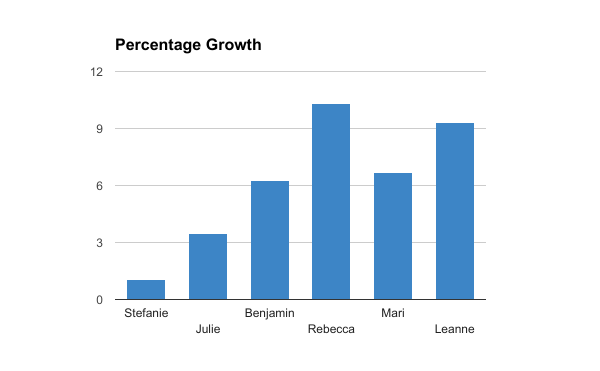 Pros and Cons Of Instaplus
Pros:

Conclusion
Overall, our team isn’t sure that we would wholeheartedly recommend Instaplus. We are intrigued by the possibilities of automating these tasks, and see that there is great potential to do so more efficiently, so we plan to do some more investigating into other possible platforms.

Update: Instaplus has been shut down by Instagram as of April 2017.

Don’t miss another blog post from Stitchcraft Marketing, sign up to receive our blog posts delivered directly to your inbox.