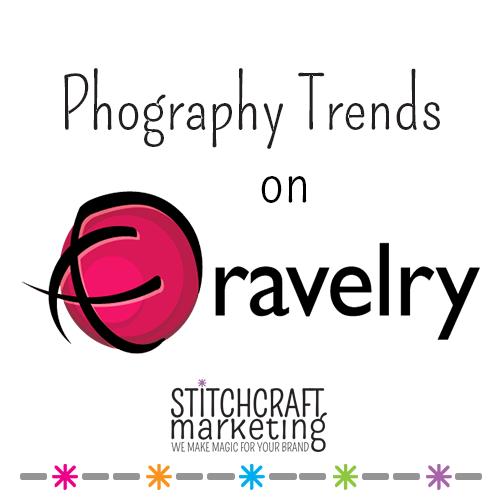 For this month’s Ravelry update, we thought we would take a look at how project photography correlates with pattern popularity. More specifically, does how a project is portrayed affect its popularity? Is there a standard or convention for different types of garments in project photography? Finally, what are the similarities and differences between the Hot Right Now (HRN) project pictures and the pictures of the Top 25 Patterns with the Most Projects on Ravelry (“Most Projects,” for the purposes of this piece)?

HRN June 27, 2016 Update
First, just an update on trends in the HRN list. As we noted last month, shawls are the largest project type in the HRN list: at 3:45 pm on June 27, 2016, eight of the top 25 HRN projects were shawls; 75% of those shawl patterns were written for fingering-weight yarn. The other project categories represented included cardigans (2), tees (2), pullovers (2), ponchos (2), blankets (2), shrugs (2), hats (2) and cowls (1) and stuffies (1). A word about that stuffie, though: Rachel Borello Carroll’s Manatee pattern, which was free until Monday, July 4th, entered the list at 14 at the time we were monitoring it and wreaked havoc with the order as it steadily climbed the HRN list. While it was #6 at 3:45 pm, by 10:30 pm on June 27, 2016, it had climbed all the way to #1. Worsted weight, cute as a button and free for a limited time, it’s no wonder Manatee’s climb was rapid and complete. We might have contributed to its rise, as we did share it on various social media…

HRN June 27, 2016 Project Photography
But, back to project photography. Ravelers tend to either photograph their projects on models or mannequins; designers who run their own Ravelry pattern stores are more likely to use models. Socks and mitts or mittens are shown on feet and hands without a model’s face in the picture; some objects are photographed without any person wearing them but in a way that shows their dimensionality. For our purposes, we loosely categorized the styling of project photography as Model, Mannequin or Flat, with exceptions noted. 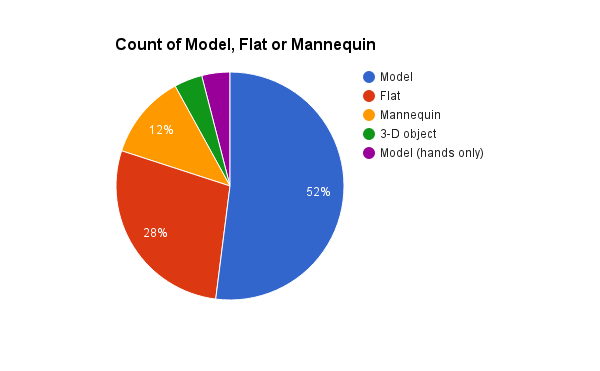 More than half of the patterns on the HRN list on June 27 used a photo showing the finished project on a model. The next largest group, about a quarter, showed the project flat or held up in a  two-dimensional manner. Five out of the seven projects photographed in this way were shawls, held spread out so that the pattern stitches or colors were completely visible. The other two flat photographs were for a shrug and a blanket. Three other shawls, however, were photographed being worn by models. The three projects photographed on mannequins were a hat, a poncho and a pullover. A pair of mitts were shown on hands, and Manatee posed alone.

Top 25 Patterns with the Most Projects Photography
When we turn to the patterns that have proven their popularity over time, a similar picture emerges, although no projects shown on Mannequins are currently on the Most Projects list. The Model photographs make up almost ⅔ of the total; flat objects again about a quarter and include the reigning #1 pattern with the most projects, Elizabeth Zimmermann’s Baby Surprise Jacket as well as another perennial, Grandmother’s Favorite dishcloth. The presence of four different sock patterns on this list as well as a pair of mitts means that the Feet and Hand category has much higher representation, that is, modeled in the photographs but without any human faces visible. Both Saartje’s Booties and Bev Galeskas’ Felted Clogs show the footwear without any feet; the lack of any human presence in the project photographs does not seem to have had any impact on their long-term popularity. These two patterns fall into the group 3-D. 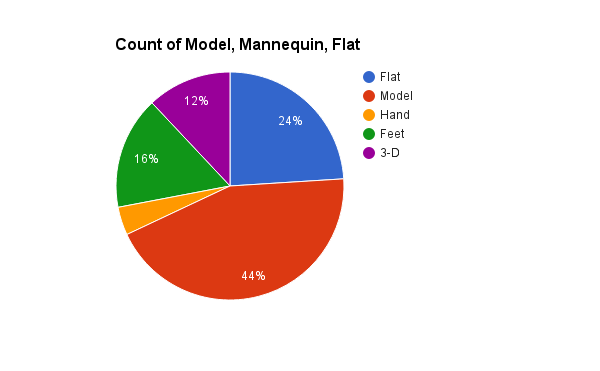 What can we learn from this brief overview of project photography on Ravelry?

We can go a little deeper into these observations and note some characteristics about patterns both on the HRN list as well as those on the Most Projects list.

Finally, just a note about the Top 25 Patterns with the Most Projects list: we originally compiled that list back in February 2016 and published it in April. When we took a look at it again in late June 2016, there was only one pattern that had dropped out of the top 25 to be replaced a new pattern (Bella’s Mittens by Marielle Henault is now #28 on the Most Projects list and Milo by Georgie Nicolson is at #24). There was some movement in the rankings, but very little: the first 12 patterns on the list still appear in that order. We speculate that there may be some seasonal influence–we’ll keep an eye on Bella’s Mittens and see where it is on the Most Projects list come February 2017.

Stitchcraft Marketing can help you determine how to present your products in the best way possible. Contact leanne@stitchcraftmarketing.com to get started.