So, is it still worthwhile to employ a third party app to run a contest on Facebook? That depends on the type of contest you are hosting. We recently helped one of our clients, Colorful Stitches, to put together a Woobox promotion for their “Vote the Art That’ll Inspire the Yarn” contest. Through September 28th you can see, and vote, here. A collaboration with Lorna’s Laces to select three illustrations that will inspire custom colorways dyed by Lorna’s Laces for Colorful Stitches. For this promotion we decided to use Ravelry as one voting platform, for people who object to Facebook, and use Woobox to create a voting platform for Facebook. Even though the Ravelry voting started two days before the Woobox voting promotion, the Woobox app has already received more votes. 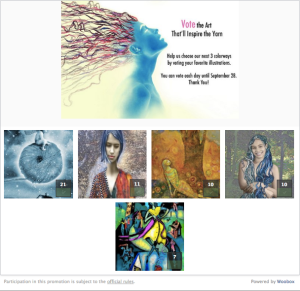 Would you like to try using a third party app for your next contest, but don’t have the time or inclination to learn all the aspects of setting up an app; call our team at 719-539-3110 and we can help you get started with a campaign.