What Makes a Knitting Pattern a Classic?

Home > yarn  > What Makes a Knitting Pattern a Classic?

26 Apr What Makes a Knitting Pattern a Classic? 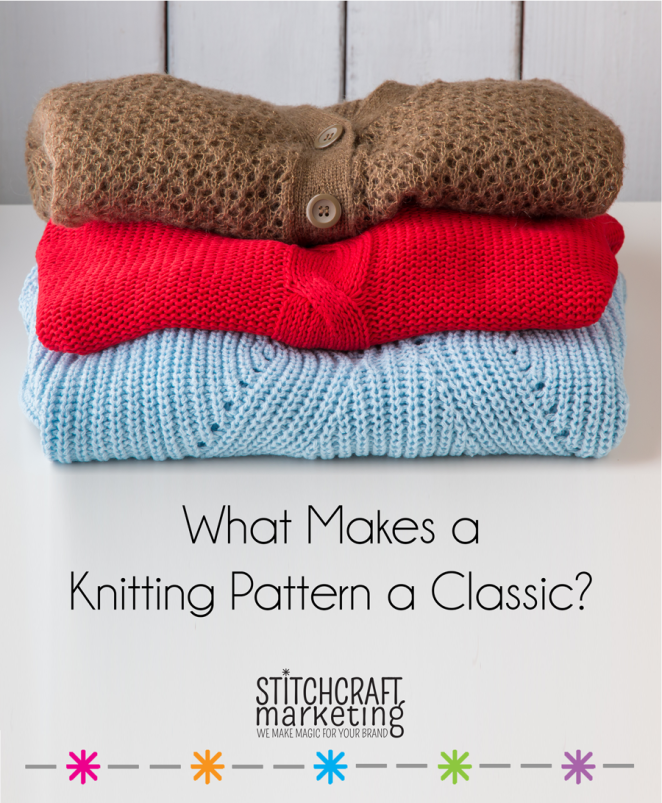 In the last post, we looked at the difference between the Hot Right Now (HRN) pattern list on Ravelry and the Top 25 Patterns with the Most Projects list. HRN reflects the patterns that Ravelers are looking at right now, while the Top 25 Most Projects list shows the classic patterns that knitters turn to again and again. The number one pattern on that list? Elizabeth Zimmermann’s Baby Surprise Jacket. You can read our analysis of its popularity here.

Interestingly, most of the rest of the top 25 patterns with the Most Projects on Ravelry are accessories, with the exception of #16, the February Lady Sweater by Pamela Wynne, (a pattern based on Elizabeth Zimmermann’s February Baby Sweater on Two Needles from the Knitter’s Almanac): shawls and scarves, hats, socks and mittens, cowls, a pair of felted slippers and a simple dishcloth. The dishcloth, Grandmother’s Favorite, is a traditional pattern that can’t really be dated, but the rest of the list were published in the last 10-15 years. What has been going on in the knitting world in that timespan that has so influenced current knitters?

One word: Knitty. Six of the top 25 patterns first appeared in the online magazine Knitty between 2004 and 2009. Knitty burst onto the online knitting scene in 2002: suddenly, fresh & modern knitting patterns that had been vetted and edited were available for free with full-color pictures of the finished objects and step-by-step directions that you could print out for yourself. The patterns were individual and published by the designers, rather than the yarn companies. Knitty freed knitters from the obligation to buy an entire booklet just for one pattern and it inspired them as knitters and as designers themselves. Knitty was upfront with their submission guidelines, their payment policies and allowed designers to retain the copyright on their designs. Knitters who had been “making up” their own patterns realized they might be designers and began to think of their work professionally. The independent designer and self-publishing revolutions had begun.

Kate Gilbert’s Clapotis, #3 on the list of top 25 patterns, took the knitting community by storm in 2004. While it was her second published pattern (see Mon Petit Chou for her first), Clapotis made Gilbert a household name among the new Internet-savvy knitters. Now with over 22,000 projects logged on Ravelry, Clapotis has the status of a classic. Again, let’s look at what makes this pattern one that knitters turn to again and again, which still feels fresh over a dozen years later:

Kate Gilbert has gone on to a great knitting design career since her Clapotis days. In addition to continuing to publish her own designs, she launched Twist Collective in 2008, an online-only magazine for knitting designers and writers, in which featured patterns are available for sale individually, with ongoing royalties paid to designers as patterns are sold.

In addition to Clapotis, the other Knitty designs in the top 25 number of projects are Fetching (fingerless mitts, #5), Monkey (socks, #6), Calorimetry (head scarf, #7), and Citron (shawl, #18). Knitty continues to be a source of great contemporary knitting design and a welcoming route into the world of design publishing.

Three of the patterns in the top 25 number of projects are more recipes than actual patterns: Jared Flood’s Noro Striped Scarf, Stephanie Pearl-McPhee’s Sock Recipe: A Good Plain Sock and the earlier mentioned Grandmother’s Favorite Dishcloth take simple knitted objects and offer knitters a blank canvas on which to exercise their creativity. The popularity of both Flood’s and Pearl-McPhee’s patterns may also reflect a pre-Ravelry knitting Internet.

At the time Jared Flood’s Noro Striped Scarf appeared, he was posting regularly as Brooklyn Tweed on Blogspot. As a knitter and a photographer, Flood and his blog exposed a lot of knitters to great knitting patterns, including many of Elizabeth Zimmermann’s classics. Flood blogged about what was currently on his needles from 2005-2010, and his list of “Completed Woolies” includes four patterns from the top 25 in addition to his own Noro Striped Scarf and Turn a Square Hat: Evelyn A. Clark’s Swallowtail Shawl, Elizabeth Zimmermann’s Baby Surprise Jacket and February Baby Sweater on Two Needles, and Saartje de Bruijn’s Saartje’s Bootees. Flood, of course, has gone on to great fame as a knitting designer, publisher of Brooklyn Tweed and Wool People, and developer of the completely American-sourced and American-processed Brooklyn Tweed yarns. From a knitting blog to a moving force in the American wool industry in just 10 years, Jared Flood and Brooklyn Tweed continue to influence trends in both knitting pattern design and yarns.

Stephanie Pearl-McPhee is another knit blogger whose blog was creating an online knitting community in the years before Ravelry. Better known to her many readers as The Yarn Harlot, Pearl-McPhee began her blog in 2004 while she was still working as a doula and lactation consultant in Toronto, Ontario, Canada. Pearl-McPhee’s humorous essays on knitting appeared in various knitting magazines and the collection KnitLit Too, edited by Linda Roghaar and Molly Wolf. While Pearl-McPhee has designed original knitting patterns (available on her blog website), her career as a knitting celebrity took off as a writer and teacher. She has published eight books of her own and teaches at knitting retreats and conferences like Madrona, Squam Art Workshops and the Strung Along retreats, of which she is a co-organizer. In addition to writing about and teaching about fiber arts, Pearl-McPhee also founded Tricoteuses sans Frontières/Knitters Without Borders, which supports Doctors Without Borders/MSF by direction donation, and is now an organizer of the annual PWA’s Friends for Life Toronto-Montreal Bike Rally. The Yarn Harlot blog is a funny, touching and authentic glimpse into the world of a dedicated lifelong knitter whose passion for the craft informs most of her life choices. When Pearl-McPhee blogs about a pattern that she is currently knitting, that pattern often appears in the Ravelry Hot Right Now list within hours. Unfortunately for some of her fans, however, her collection of knitting patterns is so vast that she often turns to an out-of-print classic from a vintage yarn company pamphlet. We can admire her work, but we can’t always duplicate it from an unavailable source. Her Sock Recipe: A Good Plain Sock actually is only available in her 2006 book Knitting Rules!

The most-recently published pattern in the top 25 most projects on Ravelry is Veera Välimäki’s Color Affection. A striped garter-stitch shawl knit with short rows into four sections, Color Affection was originally available only through a Plucky Knitter kit until 2012, then Välimäki made it available through the Ravelry pattern sales platform and through her own website Rain Knitwear Designs. Välimäki has grown her business as a knitting pattern designer independently and without print. Her individual patterns and collections are available only in PDF and E-book format, creating little overhead for her design business.

Color Affection may owe its place in the Ravelry top 25 number of projects due to the Yarn Harlot effect. While teaching at Sock Camp in 2012, Pearl-McPhee devoted a post to Color Affection, nicknaming it “Color Affliction” because it spread among the participants like a virus with everyone running through the marketplace choosing fingering-weight yarns in groups of three coordinating colors. The post included a number of pictures of completed shawls, as well as those in progress and pictures of knitters with their 3-skein bouquets of coordinating yarns. After the post, Color Affection shot up in the Ravelry Hot Right Now, which brought it to the attention of other knitters browsing the list, and its popularity grew. Like Clapotis, Color Affection is one-size-fits-all. While short-rows may seem like an advanced knitting technique, this is a good pattern on which to try them because the garter-stitch fabric does not require the wraps to be lifted and knit with their stitches. The two-row striping also provides visual interest to the knitter who wants to finish “just one more stripe,” so although it’s a large shawl, it knits up quickly because of its inherent milestones. Finally, it’s a great pattern for those random skeins of fingering-weight yarn that seem to multiply in knitters’ stashes. Putting three of them together opens up all kinds of creative possibilities. Do you want a subtle Color Affection? Choose analogous colors. If you want drama, try a split-complementary color scheme. Tone down a loud hand-dyed skein by striping it with a solid. Color Affection continues to remain popular because it offers an entertaining knitting experience and requires yarn that knitters often have on hand. In other words, it’s a stashbuster, so it creates very little yarn-acquisition guilt – but it also provides an excuse to buy just one more skein to create the perfect triad with two from your existing stash.

Välimäki’s Color Affection incorporates elements that should be of interest to yarn dyers and manufacturers. She wrote the pattern for both fingering and laceweight yarns; the combination of those two weights accounts for almost half (12) of the patterns in the Top 25. It’s a truth universally acknowledged: a beautifully-dyed single skein of sock yarn is like the Lays potato chip of knitting. Knitters just can’t stop at one, so a pattern like Color Affection that uses three skeins meets knitters where their stash is. The short-row sectioning of the shawl’s design, combined with the striping, really embraces hand-dyed yarns, as we noted. That single skein that the knitter just couldn’t resist at the fiber festival may be too loud or too muted all by itself, but Color Affection allows it to play well with others. As a dyer, you could offer coordinated triads to use in a pattern like Color Affection, but you needn’t shy away from doing the colorways you do best, because a lot of knitters find their fun in putting together the palette themselves.

We hope this has been an educational and useful analysis of one aspect of Ravelry’s pattern database. Understanding why a knitting pattern becomes a must-knit classic can help dyers and manufacturers create yarns that knitters want to use and give instructors an idea of the kind of skills knitters need to finish the projects they want to make. Next, we are going to look at the Top 25 Yarns Used to see what that reveals about what crafters consider a classic yarn.

Contact Leanne@stitchcraftmarketing.com if you’d like to hear more of our ideas about what’s going on in the world of yarn crafting.